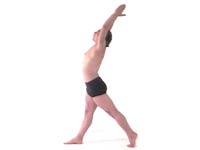 This first pose is an uncommon one but is very therapeutic. It is probably better for you than any of the other standing poses. The version shown is on the ball points of the toes but in the printable yoga fitness sequence the heel is down. Either is fine. One is more stable and the other strengthens the ankle muscles.

The sequence then moves to a hamstring stretch. It is best to enter this pose with an exhalation.

Exhale into a forward bend. The back leg may have to be moved further back. The hands are shown interlocked behind the back but the can be placed in a variety of different positions. One you may find easiest is down on the floor. This can help remove some of the strain on the hamstrings if they are not flexible. This is the case in most of us.

Inhale as you come out and turn the other leg, the right this time, and lean over to that side in a forward bend as you exhale. Hold for the same amount of breaths.

Inhale and raise the body up returning to the beginning pose but his time on the opposite side.

Exhale into the Triangle pose. Hold for a few breaths then inhale out. Turn the feet the opposite way and exhale into it on the opposite side for the same amount of breaths.

Inhale out and point both feet forward before exhaling down again. Use the hands for support.

Then step back to Dowward Dog pose.

You may want to come into Cobra pose after so many forward bends.