This yoga fitness flow begins in Virasana called Hero Pose. The hands are placed down and the knees are placed on the elbows. The body is then lifted (optional) into the Crane pose.

The knees are gently placed down and the body is laid back on the mat. The hands are placed in prayer position. This pose is called Supta Virasana which is called Reclined Hero pose. The heels are then placed under the tailbone and the knees are opened.

The knees are then taken further down and the shoulders are raised up. Weight is then placed on top of the head after it is tilted back.

Carefully raise out into Bridge pose on the head with the legs bent at a somewhat 90 degree angle. This version of Bridge pose can also be done on the ball points of the toes rather than having the feet flat.

Upward Facing Bow often called Wheel pose is the next yoga posture in the backbend part of the flow.

Here is the instructions for the yoga fitness flow.

Exhale into Hero pose holding for at least 5 breaths.

Inhale raise out and exhale as the knees are positioned and you lean forward and up. You can also just keep the legs down. Hold until the wrists or arms strain.

Slowly come out and place the knees down leaning back and down. A pillow can be placed under you back for ease. Open the knees also for an easier pose.

Carefully raise out and place the heels under the hips close to the tailbone. The inside of the heels can be touching. Use the hands for support as you transition out.

Exhale into a deeper backbend taking the knees down towards your mat. If the can touch down you will have more stability. This is not only a great quadriceps stretch but also one of the best plantar muscle stretches. (A muscle from the big to that runs along the sole of your foot. Often aggravated by something called plantar fasciitis.)

You can hold for a while until all the muscles open then on an exhale lift into Bridge pose on the head. Hold or just inhale once and move onto the next pose.

Exhale into Upward Facing Bow pose. Hold or just inhale once and move onto the next pose.

Exhale and come down into a supported straight leg Bridge pose. Use your hands for support. 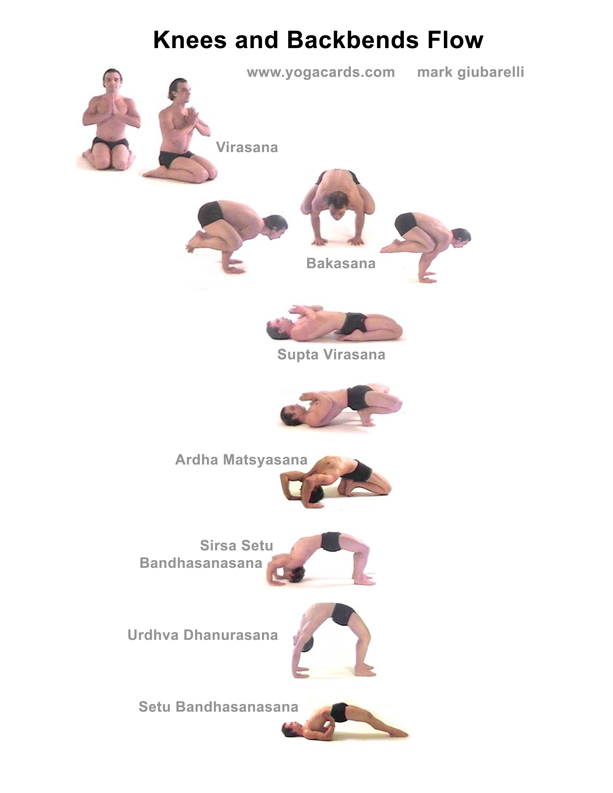